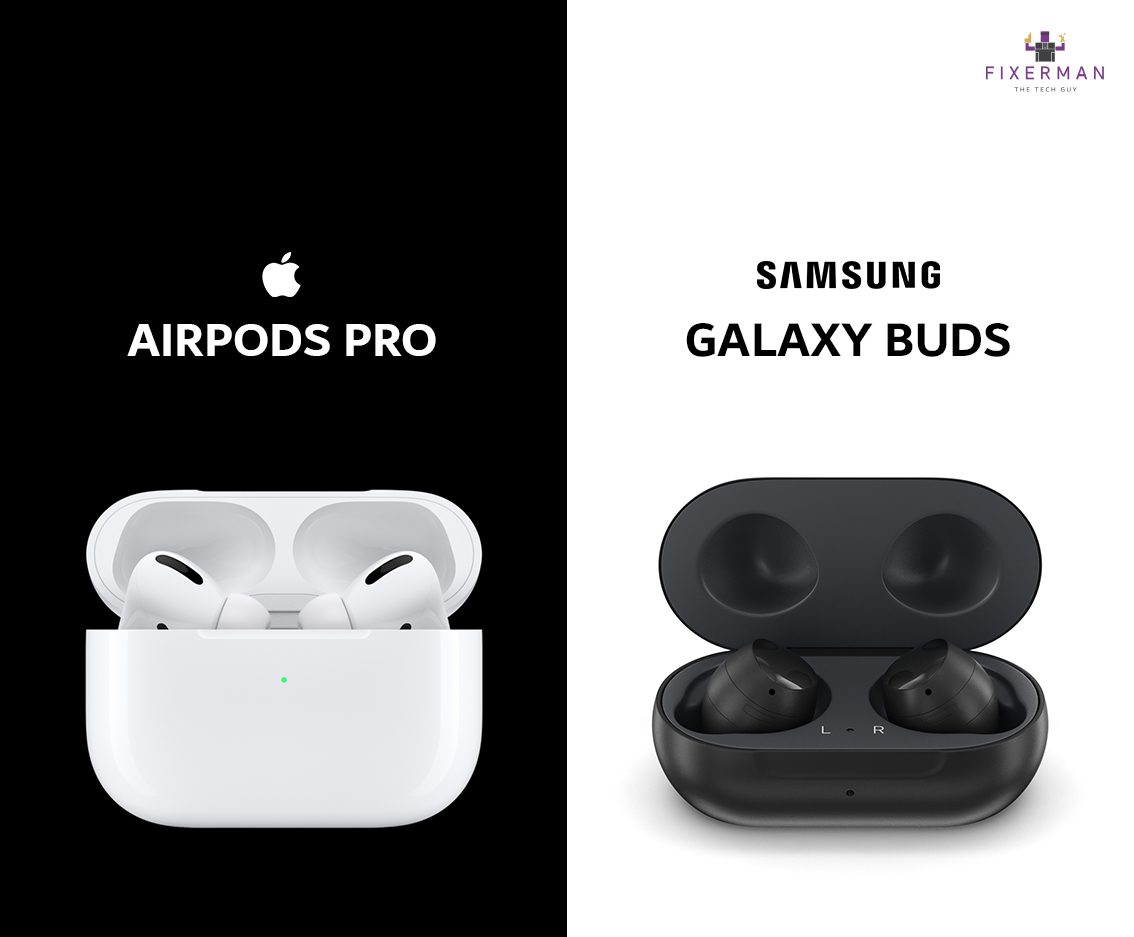 We’re back to dancing around one of our favourite friendly fires: Apple vs. Samsung. The tech giants are both head-to-head for the best wireless earbud on the market, where we compare the objective architecture and tech behind the AirPods Pro and Galaxy Buds Plus, so you can make the better subjective choice

Going off of first impressions, we find the Buds Plus to have a zippier design while the AirPods Pro maintain its predictable yet lovable minimal model. The Buds Plus come with three tips + three wing sizes to refine the in-ear fit, suggesting this might be a better pair for those out there with smaller ears. Compared to the pesky AirPods from the previous generation that kept falling out, Apple has fine-tuned its earbuds for an improved fit with three wing sizes. They have the discernible tail piece that protrudes downwards while the Buds Plus are a more compact fit. We’re slightly partial to Apple’s charging case, the little white pod is so easy to snap open and shut in one hand, if you already own a pair of AirPods, you know exactly how oddly addicting and satisfying it is to fidget around with. Samsung’s pill-shaped case might take a little effort to manage single-handedly, but it’s still an uninterrupted design. The AirPods Pro have an IPX4 rating in water resistance, suggesting that your device would be protected if you happened to get caught in a light drizzle or splash, while the Buds Plus hold an IPX2 rating, meaning it can withstand your sweaty workouts in an otherwise dry gym. Apple AirPods Pro come in its uniform white, while the Samsung Galaxy Buds Plus are available in a white, black, and blue.

There is one specification that might be the difference between a sale for Apple over Samsung, and that’s Active Noise Cancellation (ANC) featured in the AirPods Pro. This near-essential feature advances sound quality a long way, especially in noisy environments such as a busy coffee shop, or the hustle and bustle of a crowded commute. While the Buds Plus lack ANC, their compact design does a good job in providing acoustic isolation for a more dynamic sound. Even without ANC, the Buds Plus still provide a prime listening experience with the AKG woofer and tweeter in each earbud.  Both devices host an advantageous feature that allows users to be more aware of their environment when needed — “Transparency Mode” with Apple, “Ambient Sound” with Samsung — both filtering in important sounds such as airport announcements when you’re rushing through a terminal, or simply just jogging outdoors. The sound is slightly more attenuated in the Buds Plus, while more natural with the AirPods Pro. Apple maintains the lead in this category with “Listen Mode”, that uses the mic in the user’s iPhone to amplify sound and send it to the AirPods Pro, a fantastic feature for those hard on hearing, or just need a little sound boost. Apple has a more intuitive playback, with the sound pausing as soon as a single AirPod Pro is taken out of the ear, and auto-resuming almost instantaneously when put back in, a super helpful feature for when your chatty co-worker keeps passing by your desk. Now don’t get us wrong, Samsung is still putting in the work to be an equipped competitor, and even, an alternative to Apple. Unlike the AirPods Pro, the Buds Plus provide users with a highly customizable listening experience available on the app “Galaxy Wearable”, where users can customize the sound profile to their liking by adjusting playback settings. Overall, the AirPods Pro would be a good match if you’re user-heavy with phone calls, audiobooks, and podcasts, while the Buds Plus provide a more dynamic sound that’s better suited for music.

We can’t pinpoint which of the two have a better charging component, this feels like a selling point that would truly be unique to each user. The AirPods Pro have about 4.5 hours of charge, and their case holds about 22 additional hours. The Buds Plus have a better battery life with 11 hours of listening time, but only 11 additional hours with the charging case. The AirPods Pro might be better suited for intermittent users on-the-go, while the Buds Plus are a better option for those with extended listening time and prolonged usage. Both devices support Quick Charge, even on available Qi charging pads. The AirPods Pro give an hour of listening time with 5 minutes of charge, and the Buds Plus provide the same juice in about 3 minutes. The Buds Plus can also be charged on the back of compatible Samsung smartphones. An additional perk with Samsung is that it lets you see the separate charge of both R and L earbuds, which might come in handy if you tend to use a single earbud at times.

Both the AirPods Pro and Buds Plus pair almost instantaneously with the setup smartphone, but it’s evident that the AirPods Pro work more seamlessly with an iOS device while the Buds Plus remain consistent with Android as well as iOS. Apple takes it up a notch with the hand-free experience by introducing “Announce Messages”, featuring Siri to read out your texts and notifications in real time, a helpful assist when you need to keep your hands on the wheel and eyes on the road. A simple “Hi Siri!” with the AirPods Pro launches voice assistant with iOS devices, while Buds Plus require a manual tap on the touch panel. That being said, the customizability of the Galaxy Buds Plus extends into its configuration, wherein users can head into the Labs section of the app to customize the touch panel for launching a variety of actions. Samsung even partnered with Spotify, allowing users to launch their music or podcasts by pressing down on the touch panel. The Spotify integration goes further, suggesting song recommendations based on the user’s listening history, as well as personalized Daily Mixes, with just a few taps.

Both the Apple AirPods Pro and Galaxy Buds Plus put up a strong fight in the contender for best wireless earbuds in the market, and we can’t seem to pick a clear winner. We highly recommend the AirPods Pro for users that tend to be on the go more often, spend long hours on the phone, and especially for those that already own one or more iOS devices, since it fluidly switches between them. Even without noise cancellation, the Galaxy Buds Plus provide a premium listening experience, especially for those avid music listeners, with shorter charging times and a longer battery life. Apart from being almost half the price of AirPods Pro, it’s good to keep in mind that Samsung is even shipping out a free pair of Galaxy Buds with pre-orders on its more recent flagship smartphones.