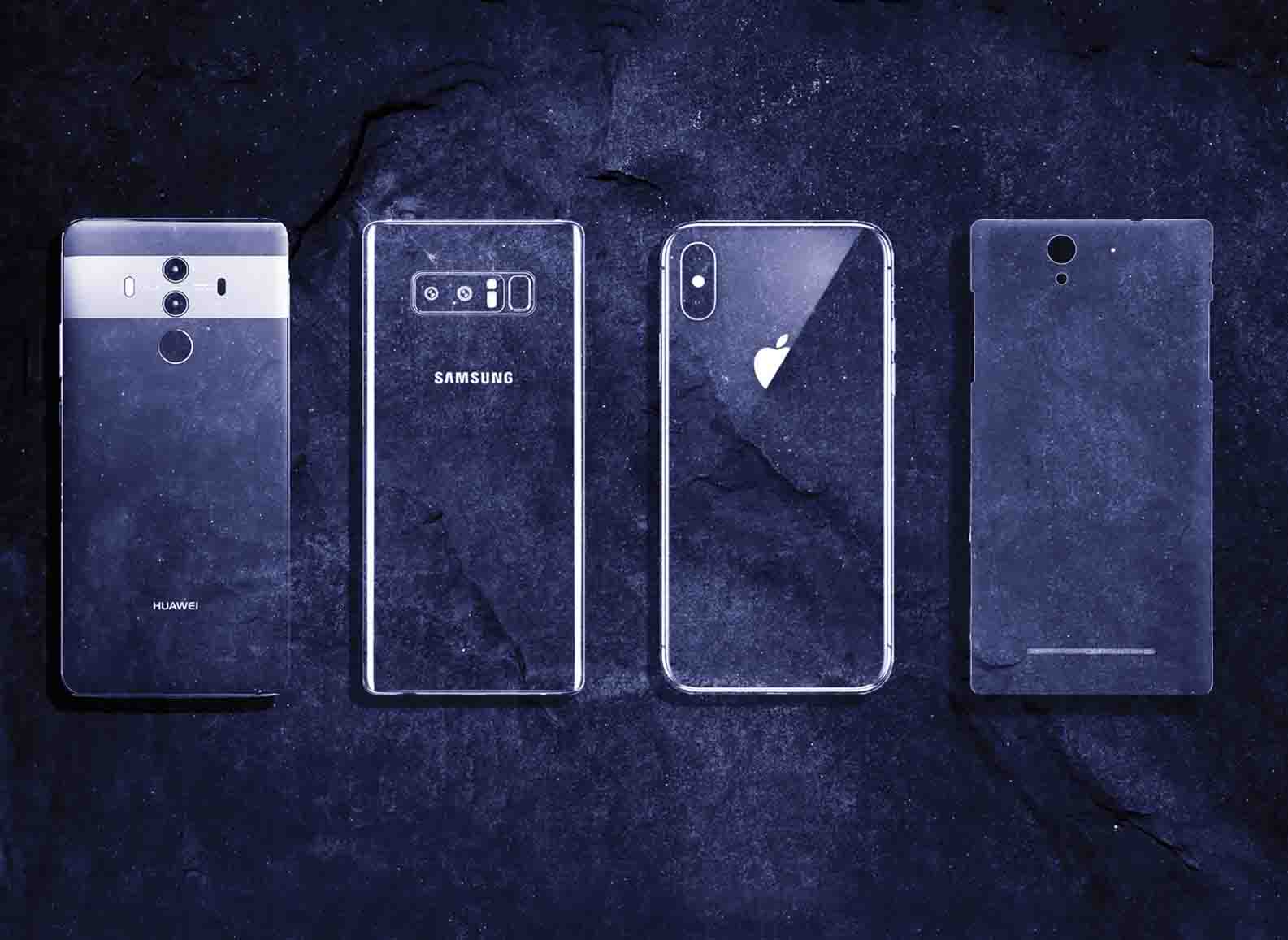 Can you believe that we are already midway through 2018. Technology is moving quickly with several flagship phones entering the market this year. With some unexpected contenders rivaling for a place. Here are 5 smartphones ruling over 2018. Lets go through shall we!

It would be difficult to have a list without the mention of this phone. So why is it so great? Well that’s easy, it is an iPhone!

This new release is the first 5.8 inch screen giving the largest viewing display of your applications on any iPhone and finally features wireless charging. Bye bye home button with the new facial recognition option. Apple claims it is far more convenient? the reaction has  been mixed. With a bunch of new gestures and shortcuts for iPhone X users. It may take little longer to get used to. But hey, we’ve got Animoji! Was it really necessary? No but that doesn’t mean we can’t have a little more fun with this phone.

iPhone X camera, best so far of its own kind with a dual 12MP sensor array. However, it stands at an edge with its rivals. So maybe that maybe a downfall when you pay a fortune (Approx. AED 4,300). Furthermore, bringing  expectations down is the size of its battery of just 2716mAh. It  has a slow charging speed taking a whopping 2 hrs 15mins for its small battery. Its debatable whether the iPhone X gives you a bang for your buck.

Yes, here is what a lot of the android users were waiting for. What does Samsung have to offer this year?

Well with this year’s S9+ (6.2inch display) set its mark in the market with world’s first f/1.5 aperture on a phone, larger RAM and a dual camera on the back of the phone. However, still at an 8MP camera front camera which is just regular for your selfies. The phone now has the benefit of Samsung adding DRAM to its image sensor stack, allowing images to be made up of a composite of 12 frames instead of 3 frames. Basically, awesome photos in terms lighting especially in the dark, image stability and clarity when it comes to those tiny details.

With a 3500mAh battery you can be rest assured that your phone can last through the day even with moderately high use of the phone. So that is a relief, don’t we all just hate when your phone decides to die out on us? Although, Samsung’s attempt to match with the iPhone X in its Animoji and Siri feature is just killing the phone’s game. It’s AR masks for its emoji doesn’t have the free flow and it’s Bixby has a lot to work on in comparison to Apple’s Siri who does a marvelous job. At the end of the day each phone has its own showstopper and game dropper, decide its worth for you starting at a retail price of AED 3,299 (approx.)

The launch of this product has left the markets in a questionable state. This is really what describes value for money. This 6.1inch display may showcase one of the better specifications in any phone out in the market right now with a powerful 6GB RAM to match, its chrome colour external covers.

Features mentioned above just scratches the surface. Let’s have a look at its camera with a crazy 40MP back camera. Therefore, It has a 3X optical zoom so voila, almost a 2in1 purchase done. With the addition of the AI camera feature make all your images enrich in colours and just look extra photogenic for your Instagram uploads. On top of this great feature, Huawei has let its users enjoy extra screen time with a 4000mAh battery which is currently the largest capacity battery in a phone. Doesn’t this sound wonderful?

Let’s come back to reality, no phone is ever so perfect. So here are some of the concerns we faced, well the screen brightness of the phone isn’t sufficient for viewing at times especially when you want it all the way up and the brightness is just not up enough for you. The interface is pretty great but nothing beats Samsung’s smooth use of the android platform. It is a close call in the speed test but not enough to outrun it. A better screen includes better resolution which is something they can work on to match with its camera. Another Apple like feature is your inability to extend its memory capacity. Although, this is great phone, sold at only AED 2,999 to substitute if you’re bored of the constant Samsung or Apple battle.

With this phone, you get yourself a Full HD+ screen and some fancy chrome exterior with vivid colors such as phantom green or blue. Guess what, you also get face unlocking technology. Don’t worry though, unlike Apple you have a finger scanning option too. Honor 10 has released its first ever home button that fit perfectly under the screen itself meaning its almost not a button just a touch scanner now. Furthermore, It also has a great battery life with a capacity of 3400mAh competing with Samsung S9+ in terms of phone usage.

This phone is also one of the first to launch the AI Camera so you photo shooting days just got better. Moreover, it comes with a 24MP RGB and 16GB monochrome camera so doesn’t that make your phone elite for its pricing (retail price of AED 1,699). This is a perfect purchase if you don’t want to blow all your money in one place. Value for money is a definite attraction but it may over time try your patience in terms of speed, usage time and so on.

For a player who has recently joined the mobile industry, Google has massive potential and showing signs of growing competency. However, it still wouldn’t be the first phone you think about buying right at the top of your head but it is definitely worth a try.

With a 6inch display screen the Pixel 2XL gives you a larger viewing. A feature that helps it stand out in terms of its hardware is the forward-facing stereo speakers of the phone. Unlike other phones its not hidden at the bottom. The framework of this works in funny ways, all you have to do is give your phone a little squeeze to boot up the google system to answer your queries.  If that wasn’t all, google took upon itself to make itself a little more magical with its own in-house system to detect the external music you may be hearing. That’s like having your very own Shazam without needing to open the app. View that mysterious song on your notification tab to figure out who sang it and the name.

With growing technology and Google on your side what more can one need? Well perhaps a larger battery as it only holds 3520 mAh. The camera on this phone may only be 12.2MP but does the job by capturing the depth of nature in the image with  a f/1.8 aperture. Google seems to be improving its game, although it may have a long way to go it is doing a great job. The Pixel 2 XL is currently priced at AED2700 (Approx.) which may seem to be expensive for its kind but that’s how it is when you want a phone from Google.

Upcoming Phones
None of these seem like the phone for you? Don’t worry about that, the year still has 6 more months to end and there a lot of line up releases that is ready to fight for the best market position. Who will win the game? Brand over Usability? Let’s find out.

Top phones that is yet to be released:
1. The 11th generation iPhone and the Phone SE 2
2. HTC U12+ – a competing device with major flagships such as Apple, Samsung and Huawei.
3. Huawei Mate 11 – a similar business version of its brother Huawei P20 Pro
4. Samsung Note 9 – The most powerful and capable smartphone by Samsung