Why the Apple MacBook Repair is costly in Dubai?

Why MacBook repair is costly? Here are the Reasons! 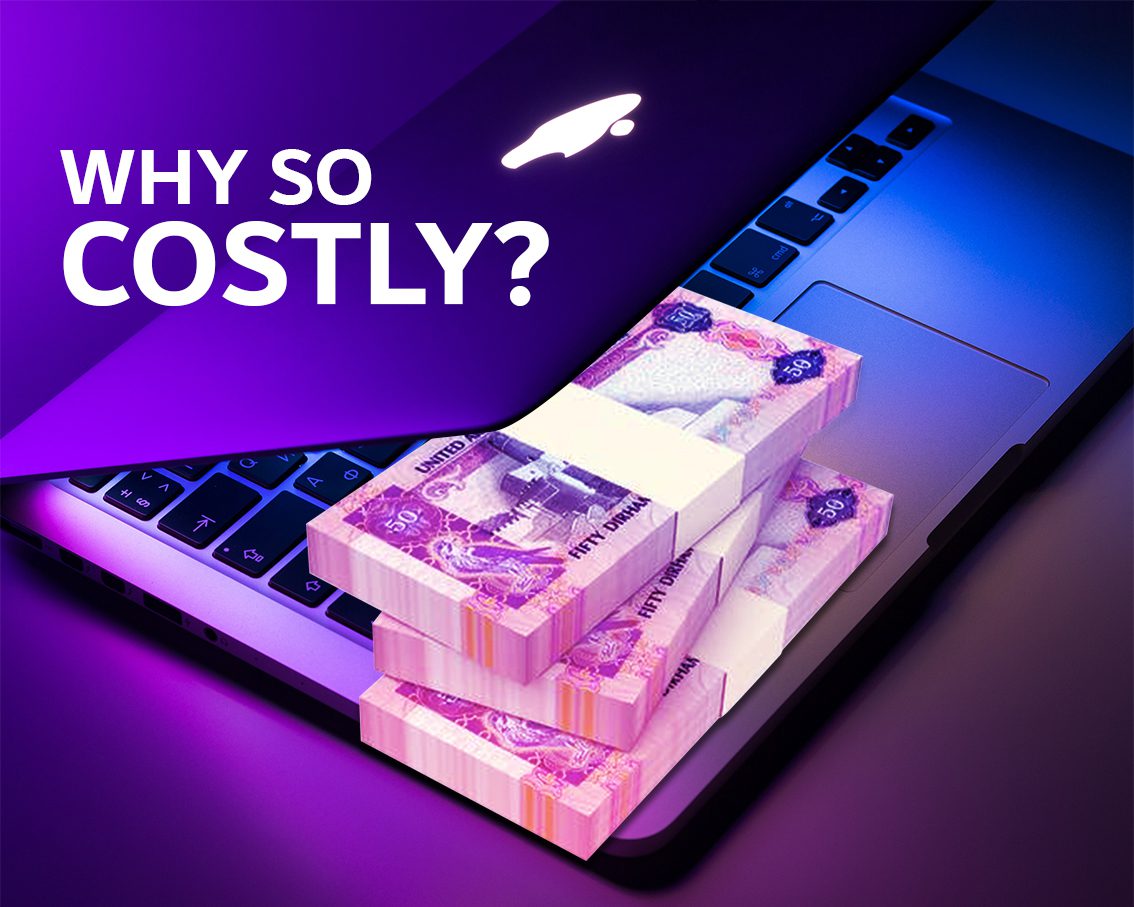 Repair costs have been on the rise for a while now, with Apple coming out on top. If you’re a proud owner of an Apple product, there’s a high chance you handle it with a bit more care than your other tech, as if there’s a fragile sticker slapped on top. After all, that impending cloud of repair costs always seems to be hanging around. One accidental slip followed by a frantic google search could show you MacBook screen prices so steep, that you’ll be left questioning if you should just replace your product instead of repair.

Since the inception of tech, users have taken repair matters into their own hands wherever possible, especially if it means cutting down on costs. With access to spare parts, combined with endless online forums and tutorials, there’s been no better time to give a go at fixing your own gadget. However, Apple products remain notoriously hard to repair given its miniscule proprietary components and rife use of adhesives.

An Apple a day keeps the customers at bay

MacBooks from the early 2000’s consisted of a replaceable battery that could be easily swapped by the user. At that time, initial MacBooks had an estimated battery life of around five hours, half of what they run at today. A shorter battery life deemed a replaceable battery imperative — users were able to carry around a fully charged backup battery to replace the used battery once depleted. This was back when users could take apart and access the inside of their own MacBook conveniently. The capacity to instantly recharge your laptop was a huge convenience for users on the go at that time, an attractive feature that drew more consumers towards Apple. In 2008, Apple unveiled the first of its kind: The MacBook Air. It featured a non-removable battery, which meant users could no longer enjoy the accessibility of battery swapping, and would ultimately be forced to pay for pricier battery replacements once it’s degraded. However, the advantage of this technology was tremendous. The battery technology revealed in the original MacBook Air was groundbreaking for its time and was possibly the reason how the product came into fruition in the first place. Instead of using traditional cylindrical lithium-ion cells, Apple created custom lithium-polymer cells, which were sleek and rectangular, allowing the battery to fill up the entire body of the MacBook Air’s chassis, making the battery non-removable. Apple could then get rid of components that made the battery removable, allowing them to squeeze in 30% more battery than earlier models, and make a MacBook dramatically thinner than any predecessors– giving birth to the MacBook Air.

As business at Apple boomed, the components used in their MacBooks were becoming increasingly proprietary while decreasing consumers’ access to the inside of their own laptops. For Apple, the benefit of a non-removable battery seemed far greater than providing users with the option of swapping parts.

In the recent years, the 2012 non-retina MacBook Pro could arguably have been the most feasible MacBook in terms of upgrading: it features a non-proprietary RAM and CD which could be easily upgraded, even the battery is screwed, rather than glued in place. However, with the release of the newer MacBook Pros in 2016, we see an end of an era. Apple sacrificed on upgradeability, with a glued down keyboard and a RAM that’s soldered onto the logic board, users are now unable to repair and customize their MacBooks as they could once before.

Apple continues to play a heavy hand in lobbying against the “Right to Repair” legislation in California — a law that if passed, could make it easier for customers to repair their own electronics. Such legislation would oblige companies like Apple to make their repair information public. Currently, Apple being the sole provider of official repairs, protects its intellectual property, consumer safety, and protects device security.

Rather than parts, an element with far greater influence on repair costs is labour. Since 2013, Mac Pros have been assembled in a plant at Texas, U.S.A. However, with the majority of Apple assembly taking place overseas, the new Mac Pro will shift production to China, where assembly lines are cheaper and more efficient. The whole point of outsourcing labour is to cut costs, but that doesn’t seem to be the case after Apple has been caught in the line of fire after President Trump imposed a 25% tariff on all goods imported from China.

So what’s your next step? Where do you repair your MacBook in Dubai? At the Apple Store, a Genius Bar technician runs steep and separate from hardware costs. Only Apple authorized repair shops have access to the official training, literature, and the opportunity to buy genuine parts directly, while third party shops pay a fee to become authorized. The last thing you want to do is skimp on repairs for a product you invested so heavily in– give your device the care it deserves. Since you’ve made it this far in the blog, let’s get down to the main reason MacBook repairs are so expensive — it all boils down to how it’s made.

The devil’s in the details:

For newer models after 2016, the processor, RAM, and flash memory are soldered to the logic board, which complicates individual repairs. The older models have the RAM surface-mounted adhered to the logic board which makes it impossible to upgrade, and forces your hand into buying a newer model. The keyboard, speakers, and battery (Touch Bar included in newer models) make up the top case assembly which are all glued together — no wonder replacing just one broken key is so tedious. For MacBook models with Touch ID, it doubles as a power button paired with the T2 chip — a snag with power button could call for a new logic board. Models with Retina Display prove to be the most laborious of them all — it’s a fused unit with no protective glass — any display failure would call for a replacement of the entire assembly. For the same, replacing the trackpad couldn’t be done without removal of the battery. The proprietary screws make it impossible for a general user to gain access without the right screwdriver.

Looking for the best MacBook repair shops in Dubai might feel like everyone is out to run your pockets dry, but remember: with great costs comes great responsibility. A quick fix might save you a few bucks this week, but you’ll end up paying for it in the long run. We at Fixerman, give high priority to keeping our environmental impact at the minimal, making us constant advocates for sustainable repairs over replacements. It’s not just better for the environment; it’s better for your wallet too! Keep us in mind next time you need to get your laptop repaired in Dubai— you might have made an expensive mistake, but Fixerman will help you get your money’s worth.