How to choose the right Smartwatch for you? | Fixermanme Tech Blog 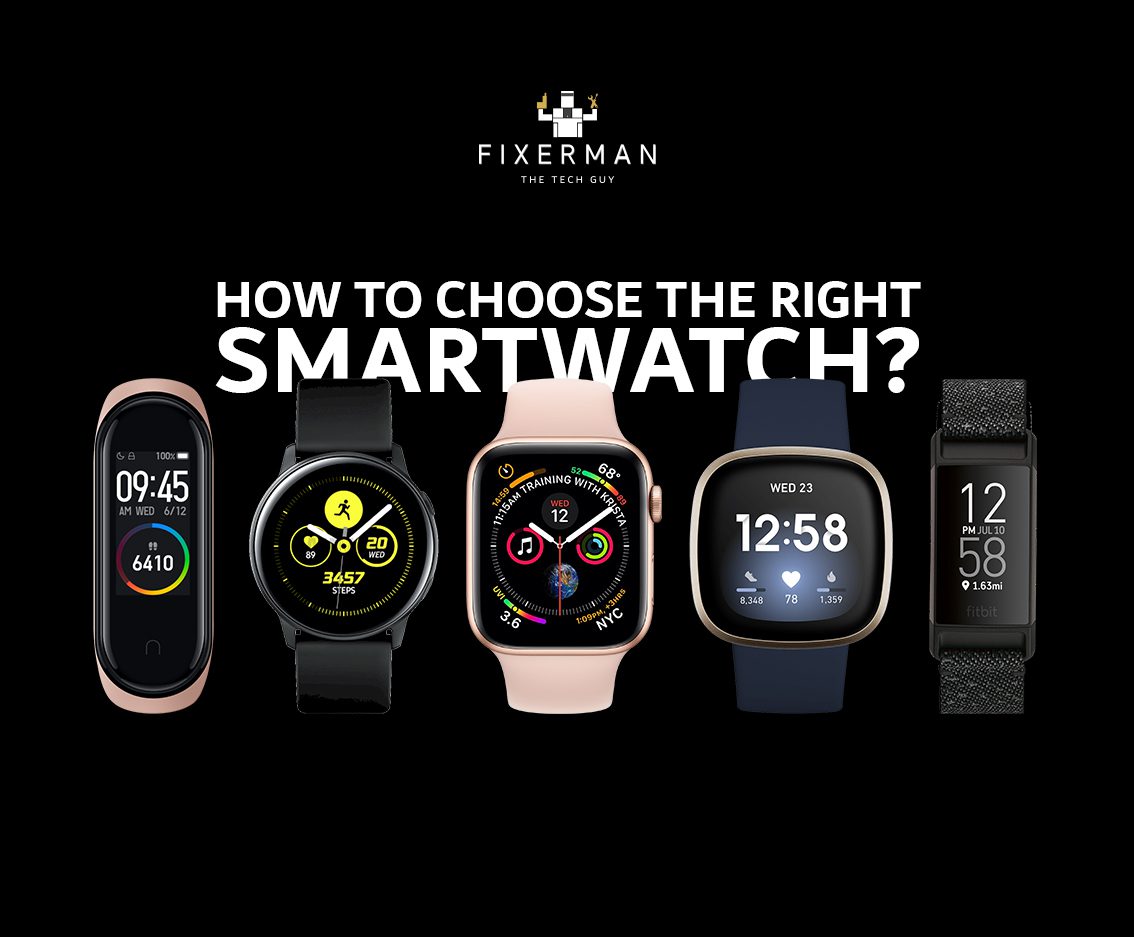 2020 was a big year for smart watches and fitness trackers among other things. With people looking to take a closer look at their health and needing a little bit of extra help in the fitness department. The good news is now we have more options than ever before, so we have come up with my list of favorites to help you decide which one is right for you based on form function and most of all price.

First up the Fitbit versa 3. It may not be the smartest or the cheapest one on our list but it’s on this list for exactly for that reason. It is a great middle of the road option that is compatible with both android and iOS devices, unlike the apple watch. It now has built-in GPS which means you can leave your phone behind when you are going for an outdoor run or any outdoor activity that requires distance tracking. It also has heart rate zone notifications which essentially tell you how hard you are pushing yourself during a workout. It is also one of the best smart watches for sleep tracking that we have ever tested, and it obviously tells you the basics like sleep duration and the different stages of sleep. But in addition to that it breaks out other health metrics like your SpO2 or blood oxygen levels throughout the night, and skin temperature variations. If you are looking to keep close tabs on all aspects of your health this one is a good option. The downside is it’s not quite as seamless as other smart watches, like say the apple watch or galaxy watch which has essentially been tailor-made for their respective devices the iPhone or the galaxy phone. So, it’s just a little bit slower it’s slower to sync with the mobile app and it has fewer third-party apps to choose from. However, the battery will leave both of those in the dust with up to six days or if you like to have the always on display and go for a couple of GPS workouts then we’re looking at three days roughly which is still better than the other two.

If you have an iPhone, you really cannot go wrong with an apple watch really any apple watch. But our pick for this year would have to be the apple watch se mainly because it is just the best value out there especially for first-time buyers. You get pretty much everything we love about the watch including the seamless integration with your phone, fitness tracking, heart health alerts and fall detection for about a hundred dollars less than the series six. Now, the main reason to splurge on the series six would probably be the always-on display which is pretty nice but if you have never had one on a watch you are probably not going to notice it, plus It goes through your battery faster. The series 6 is worth a look if in fact you do need an electrocardiogram or want to monitor your blood oxygen levels because the se just does not offer that. You can go to the other extreme with the apple watch series 3, which is still on sale, and it costs 200 dollars. It has a lot of the same smart and fitness features but it still kind of has that older design with a smaller screen.

The android equivalent of the apple watch se would have to be the galaxy watch active 2. This is a year-old watch at this point, but it is a better value than the more current Galaxy Watch 3. It is by no means as flashy as the Galaxy Watch 3, with its sweet rotating bezel but that might not be a bad thing depending on the look you are going for. Plus, it has almost the same features as its more expensive counterpart including that ECG app which arrived earlier last year on both of those devices. It has fall detection, it has a running coach, it has sleep tracking, and a slightly longer battery life which is roughly about two days depending on the size of the model.

If you are really looking for value take a look at the Amazefit Bip S. This 70-dollar smart watch is compatible with both Android and iOS and checks most of the boxes when it comes to features. It has a heart rate sensor always on display built-in GPS tracking and the best battery out of all the device. You can get up to 40 days on a charge, but more realistically if you have the always sound display at full brightness and are tracking GPS workouts it is going to look like two weeks, but that is still really impressive. Now, as to be expected, that price tag does come with some sacrifices including the design that plastic casing just does not look as premium as some of the other options on this list. The screen is not quite as responsive, not to mention the app can be a little bit buggy.

Now let us move on to the fitness tracker category with the Fitbit charge 4. It could be considered more of a crossover because it still behaves a lot like a smart watch in some ways but without the extra bulk. You still have a touch screen and a couple of apps and can even do quick replies for notifications if you have an android phone. For fitness tracking, it goes beyond the basics with a built-in GPS heart rate zone notification, you also have those advanced sleep tracking metrics that we mentioned for the Fitbit Versa 3, along with mobile payments. You can also just forgo all the smart features all together if you do not really need them and take a look at the Fitbit inspire 2 which still has a lot of those great fitness tracking features and the sleep tracking but for 99 dollars.

It comes in a sleeker package and this one is definitely not a looker but for forty dollars you might be willing to overlook that. It has an AMOLED touch screen that’s easy to see even in direct sunlight, 24/7 heart rate tracking, sleep tracking and a two-week battery life. Now you do sacrifice a couple of things in this fitness tracker you don’t get as many workout options to choose from, so it will only detect things like walking running cycling and swimming.

There you have it, our list of best smart watches and fitness trackers to help you choose the best one for yourself according to your needs and budget!